Each culture has its own customs regarding how much and what sorts of information individuals share with others. Even within broad areas such as our own country, we have many subcultures, which dictate our comfort level with sharing information. In small towns everyone seems to know everybody else’s business. City dwellers are less likely to share information with their neighbors. Some families forbid any mention of finances or troubles to “outsiders.”

Technology too, affects our expectations of sharing information or not. Many seniors among us remember “party line telephone service.” Neighbors would share a phone line with each home having a distinctive ring that indicated which home was being called. Two long rings, it was for the Johnsons; two shorts, it was for the Millers. One long and one short meant the call was for the Abbots. Regardless of the ring, there were always the curious who picked up their phones to see who was calling whom and perhaps even what the call was about!  Telephone users had very little, if any, expectation of privacy. 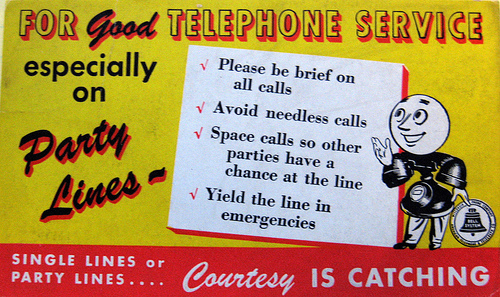 Technology advanced, and a new generation did not have “party lines.” Privacy became an expectation until Americans and others around the world learned that call records and even specific information was being recorded. A new conversation began about privacy issues and expectations.

It isn’t just telephones either. The wide spread use of computers and social media seemed relatively simple at first. It did not take long to discover that there are important decisions to be made about our use of Facebook, YouTube, Twitter, and Flickr, to name a few.

We create user names and passwords that we consider secure. We change them often enough to make sure they remain secure. Most of the time they do, but what happens when we die?

This is a dilemma of sorts. The Internet Providers want to protect your privacy, in order to have you feel at ease using their product. There are situations; however, that are not so easy to manage.

Consider the grieving dad of a thirteen-year-old who died from cancer. The dad had bought his son an iPhone nine months before his son’s death. The teen had taken many photos of family and friends during the months of his illness. The father naturally wanted to preserve these. In some cases, companies have deemed digital property to be similar to other property and have allowed access to the legal executor of the deceased person’s estate. An increasing number have required a court order rather than take a chance of being held liable for a wrong decision.

In the case of the teen, it further seems logical that a parent would have access and a right to everything a minor had online. It would not be so logical to assume that would be true if the deceased were an adult. One such case was brought to court when the surviving father of a soldier wanted access to his son’s email account after the son was killed in action. The two had kept in touch frequently via email. The father already had the emails they had exchanged between them, but he wanted access to the entire contents. Eventually the court found in favor of the father who was the executor of his son’s estate.  Still, the ethics of that decision were not so clear. Would every young man want the entire contents of his email shared with his parents? Perhaps some would not.

Some accounts are valuable, not only to the individual, but to family members. Some genealogists, for example have spent hundreds of hours researching and compiling Family Trees. They may have treasured photographs and documents. No doubt about it, this is an account the owner will want to pass on. This is a situation that would require more than just naming an heir to the treasure. The best-case scenario for this asset, would be to actually train the heir ahead of time on how to access and use the tools while the researcher is living.

Laws that pertain to “Digital Legacy” are still evolving. One thing is pretty certain, though; it is a good idea to decide how you want your accounts handled, and make those instructions part of your will or trust.

Here are a few logical steps toward assuring your digital legacy is treated according to your wishes:

Keep Private that which you choose.

Our office can help.