James Hilton: A loving husband and a man of many talents 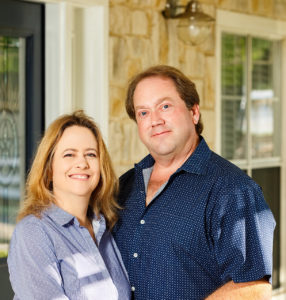 When James Hilton says he has been “happily” married to his wife, Leigh, for 32 years, he means it! They’ve traveled the world together, raised two fantastic boys, and still found time to create the successful law firm we all know and love. They spend more time together than many couples can boast — and they love every minute of it.

So what’s the secret? Well, that’s the fun part.

According to James, he and Leigh have always gone above and beyond to maintain a healthy marriage. For the first few months that Leigh was in law school in Houston, she’d tape all her classes and then mail those recordings to James, who was still in Denton but would drive the four or five hours each weekend to visit his bride. He’d pop the tapes into his car and listen to every word the entire way and once he moved to Houston, while driving around town.

“If there is one thing you have a lot of when it comes to Houston, it’s drive time,” James said with a laugh. “There are people who have problems with divorce, but it’s actually higher for couples when going into law school. We were very proactive in making sure that didn’t happen to us. I don’t remember who came up with the idea for the tapes, but she was recording the classes anyway. So she’d send them to me, and I’d listen. I’d know what she was doing, so we’d always have something to talk about when I got there. If she had a teacher who was difficult or challenging, I could hear it in the tapes. And it always helped me to know and understand why she was so busy.”

James has never been one to sit still. He got his degree in strategic management in 1998, and got his private pilot’s license. We mentioned his love for travel, but he is also an avid coin and stamp collector while also having cobbled together an impressive collection of first-edition comic books from his childhood and more recent purchases.

James was born in Denton and graduated from UNT. He worked for Radio Shack for over 15 years and is also a Deacon at First Baptist Church of Denton.

His insistence on being a life-long learner in the years since he has become our firm’s Jack of all trades. James handles all technical support issues, operations, interviewing team members, building maintenance, strategic business planning, and networking. And yes, he has a little bit of legal knowledge in his back pocket — thanks to all those tapes.

“I wear many hats,” James said. “People come up to me at networking meetings and say, ‘Let me pick your brain. I know you’re not an attorney, but …’ I’m careful not to give legal advice. I don’t mind when people see me and think of Leigh. That means I’m doing my job.”

He added, “[32 years] has flown by. We’ve had a great time. The secret is making happy memories together.”