How far can you walk in knee-deep mud? 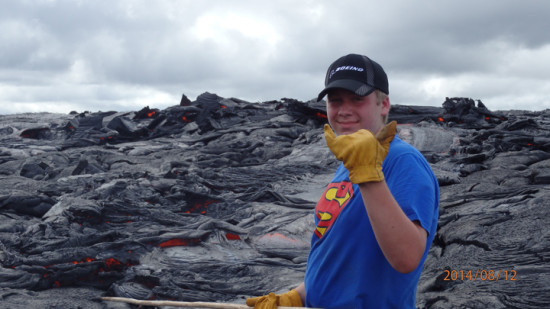 I found out my limit is 3 miles. Matthew’s limit is 6 miles. We went to Hawaii and signed up for a Lava Flow Tour. The website said it was approximately 2½ hours of walking and 1 hour of interacting with the lava. When we got to the tour place, the lady behind the counter said the first 3 miles would be some knee-deep mud. I pictured a dirt path with some areas of mud puddles that you have to walk through. It actually was 3 miles of continuous knee-deep mud with occasional portions of waist-deep mud. The only way to stay out of the mud was to walk on the very spread out boards and tree limbs that they had put on the trail. These were covered in mud and very slick.

I hiked in the mud while trying to step on the logs and branches, and the first time I fell my first thought was, “Please don’t let me break my nose, again.” I don’t know if you remember, but I have told you several newsletters ago that I broke my nose the first night we were in Hawaii celebrating our ten-year anniversary. We were hiking out to see lava in the evening.

Toward the end of the portion of the walk that I finished, I got so tired that I quit being as careful where I placed my feet. I fell 3 more times and had very scraped up knees and hands. James, Brad, and I made it a mile and half on the mud walk and then we turned back and had to hike another mile and a half to get to the car. Matthew finished the hike. He hiked a total of 9 hours. He was rewarded with being able to put a stick in fresh lava and hold it till the lava cooled. He says it was worth the walk. It is a memory he will treasure for the rest of his life.

We were in Hawaii on the Big Island when two hurricanes were detected heading straight for us. Fortunately, we were on the opposite side of two fourteen thousand foot mountains. The mountains caused Hurricane Iselle to be downgraded to a tropical storm before it hit the Big Island. Hurricane Julio’s path changed, and it avoided the islands. It was spooky watching the two hurricanes during the week before. For a long time, the weather service was showing both hurricanes hitting the Big Island, with Hurricane Iselle predicted to hit as a Category One Hurricane and Hurricane Julio as a Category Three. I heard that many people paid as much as $3,000 per ticket to fly to the mainland. On the side of the island we were on, there were fortunately no power outages or downed trees.