Caitlyn Ashley Reflects on Her Time as a Rotarian, Helping Others 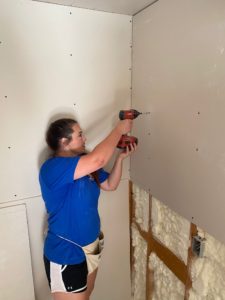 It was a typical weekday afternoon, and our very own probate attorney Caityln Ashley found herself hanging drywall in a cute one-story house in Pilot Point. Caitlyn is used to rolling up her sleeves and putting in a few hours of hard work, but as she reached for the nearest drill and a few screws, it was clear she was a long way away from the nearest courtroom.

“I was hesitant because I thought they’d need more skilled people,” Caitlyn said with a laugh. “I figured I’d be painting.”

As it turns out, Caitlyn is quite the accomplished do-it-yourselfer and dove headfirst into the project. Not only did she help drywall an entire house in a day, but she and her fellow Rotarians at the Rotary Club of Cross Timbers in Flower Mound are doing their part to build it from the ground up in partnership with Habitat for Humanity. According to its website, Habitat for Humanity has helped more than 22 million people build or improve the place they call home while helping homeowners achieve the strength, stability, and independence they need to build a better life for themselves and their family.

Though the project Caitlyn was delayed multiple times due to the coronavirus and rain, the goal is to complete the home in 18 days—right down to the last shingle, the last bit of landscaping, buying new furniture and appliances, and carefully placing a few decorations.

“It’s been a long time coming,” Caitlyn said of the project, which is for a single mother of three children. “And it’s not just building a house. We want her to feel like she has a home.”

Caitlyn, 27, will be the first to tell you that she is the youngest member of her rotary club. But she is not short on experience. Born and raised in Denton, she helped launch a rotary club as a student at Guyer High School. Rotary is called Interact at the high school level, but it mirrors the mission of Rotary International, which has been around for more than a century and has local chapters for adults throughout Denton County.

Interact gives students the power to run their own clubs while receiving guidance from a local rotary chapter. The Denton Rotary Club sponsors Guyer’s Interact, and Caitlyn was her chapter’s vice president.

“My exposure to Rotary goes back to high school, and I always enjoyed being a part of it,” Caitlyn said. “So, when Leigh [Hilton] suggested that I go to Cross Timbers Rotary as a guest, I already knew the guiding principles of the organization. I knew what they stood for and really looked forward to it.”

Caitlyn became a Rotarian in August 2019, only seven months after joining Leigh Hilton PLLC. The home project we mentioned earlier was already well in the works before Caitlyn’s involvement, but she was an integral part of helping get all the funding in place to turn a dream project into a reality.

“It’s really coming around,” she said. “We’ve had contractors helping us with the harder stuff, but they needed volunteers for everything from A to Z. And, they were willing to teach you. I even grabbed a jigsaw and cut out the space for the windows. They didn’t let the volunteers do the texturing of the walls and things like that, which was sad because I really wanted to do that. But there will be other chances to go out there.”

That’s the piece to this journey that Caitlyn appreciates the most. She loves being able to work with our clients to give them peace of mind and enjoys the flexibility to go beyond our firm’s walls to help the community.

“We meet every Friday morning for Rotary, and at first, I didn’t think that was something I’d be able to do because of my job,” Caitlyn said. “But Leigh told me, ‘no, I want you to join and be involved as much as you can.’ It’s nice to have that type of support from your employer. I’ve met a lot of great people, and I feel more fulfilled as a person.”

Especially now that she is a professional at hanging drywall.