Are Iguanas Friends or Foes? 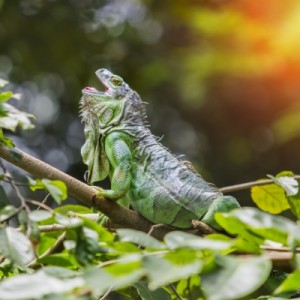 We recently went to St. Thomas and saw lots of iguanas. Before we left, I had a client tell me she had lived many places where there were lots of iguanas and she didn’t like them. Prior to that time, I had only seen them at a distance in Mexico, so I thought they were interesting. It was exciting to watch them, because I had never seen them in the wild.

When we got to St. Thomas, our room had a balcony that overlooked the arriving cruise ships. It was a beautiful view and in the grass below the balcony, there were eight iguanas. It was interesting to watch them walk around and eat grass and leaves. At night they slept in the small trees. The novelty added to the fun of being on vacation.

Then we went to Coral World, which is like a very small Sea World. Iguanas were all around the picnic area. They were right under our table while we ate. It looked like they were used to being fed, even though the signs all said not to feed them. They were as obnoxious as pigeons are around here, begging for food. The wax paper that was around my cheeseburger blew off the table and an iguana snapped it up right away. James was telling me to pull it out of the iguana’s mouth but it had sharp claws and I was worried it might scratch me. I chose not to try. A guy who worked at Coral World walked by and I told him about the iguana. He said that he was not on lunch duty, but went to find the guy who was. That guy followed the iguana around at a distance and tried to get the iguana to give it back. I am not saying he just asked politely, he really tried, but he was obviously cautious. I asked him if iguanas would bite and he said,.“Yes, they have really sharp teeth.” He said he had been bitten once before and didn’t want to let it happen again. Hearing that, I didn’t feel as bad about being afraid of it. I spent the rest of my lunch time concerned that one might bite me. They would stand right up against my legs begging for food. I didn’t want to upset them, but I didn’t feed them from my hand either. I decided after that experience that I like iguanas at a distance but not close up.

Despite the iguana scare, James and I had a wonderful vacation in St. Thomas. We went snorkeling every day, which I have decided is one of my favorite things to do. It is so relaxing and it is fun discovering different types of fish. We saw Caribbean Reef Squid and even a lionfish. James saw the lionfish first. He pointed at it and told me it was poisonous and then swam off. The lionfish was fully puffed out and looked ready to attack. I don’t think I have ever swum so fast. Later we saw a poster saying to report any lionfish sightings. Lionfish are poisonous and not native to the Caribbean. They have no natural predators in the area and voracious appetite for other fish.