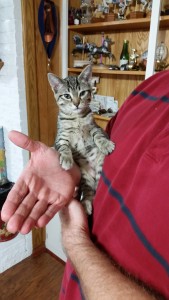 We got a kitten from the Linda McNatt Animal Care and Adoption Center a couple of weeks ago. I am preparing for the usual, but somewhat awkward, question about what we have named her. Her official name is Katy, but how we got there is quite a story.

James said he was going to call her “Cat” regardless of what we named her. That sounds a bit like he doesn’t like this kitty, or perhaps even cats in general, but he was our last cat’s favorite person. He spoiled her and spent more time with her than the rest of us.

Matthew said he would probably call her “Kitty” regardless of what we named her. We thought of Kitana from Mortal Kombat, so Cat and Kitty would be good nicknames. As we got acquainted with her, and saw how cute she is, that seemed like too violent a name.

I came up with Katy, because Cat and Kitty would sound the same to her. Nobody else liked that name either.

I was in the car with Brad when I suggested Katy, and he said it would not do because a lady who took care of him when he was a child was named Kati. He is still very fond of Kati but said it would be weird to name a cat after her. I replied that I would spell it differently so it wouldn’t be the same as Kati.

I said, “Yes, but I will pronounce it Katy.”

When we took her to the vet because she had an upper respiratory infection, I was tempted to tell the vet our cat’s name is “Quelp” pronounced Katy, but I wasn’t sure he would find it as funny as we do.

Her name is actually Katy now because I was the one who filled out the first official record at the vet.

I had forgotten how small they are when you first get them and how much time and attention they require. We are all really enjoying playing with her. She wants to be played with and held at all times. James says when she meows she is saying “It has been five whole minutes since I had your undivided attention.”

Katy is a big contrast to our last cat was only interested in us for food and when it was really cold or hot, so she could come into the house. James said she wanted more attention in the beginning, but I don’t remember that part.

We are enjoying Katy more than I imagined and she is making a great addition to the family. It is fun to have someone great me so enthusiastically in the morning and when I get home from work.